THANK YOU FOR SUBSCRIBING

Gregg Ward, President & CEO
In 1986, Gregg Ward was literally a “starving artist” in New York—honing his craft as an actor, director, and playwright at night—while working at temp jobs during the day to pay the rent. Then, out of the blue, he landed a role that would change the course of his career. The NYPD needed professional actors to help them develop and deliver an interactive training program on managing “Emotionally Disturbed Persons” in public spaces, and Ward was tapped to cast and direct the acting troupe. Due to thisunique approach, the program was a huge and unexpected success; CNN and the NY Times covered it, and Ward and his actors trained thousands of officers in highly intensive, small group, experiential learning sessions that many cops said was the best training they’d ever had.

Today, with a client list that includes most of the top companies in the Fortune 500, and teams of actors on call in New York, LA, San Francisco, Denver, Miami and London, Gregg Ward is the president and CEO of the Gregg Ward Group, a specialist training, consulting and executive coaching firm based in San Diego. He is considered one of the world’s foremost experts in the use of live, professional theater, experiential learning, and interactive facilitation in training programs that focus on complex workplace issues such as leadership, managing conflict, diversity, and inclusion, preventing harassment and respect.

“When you’re delivering training on emotionally loaded topics,” Ward says, “It’s not enough to talk about concepts and teach some tools. If you want your program participants to learn-and-then-go-out-and-do, you must allow them to ‘feel’ what it’s like to use those tools in a realistic, yet safe environment.” He helps his clients do this by creating customized training programs featuring professional actors performing short scenarios and carefully structured and monitored role-play sessions.

Ward develops the scripts, heads up the casting and directs the actors himself after leading intensive focus groups with a wide range of client representatives to determine their specific culture, challenges and the jargon that is unique to every company.

“Typically, when people are in a training program and hear the words ‘role play,’ they cringe. That’s because they’ve done role play in the past with colleagues who are not professional actors, who can’t stay in ‘character,’ are terrible at improvisation and would rather be doing anything else. In their eyes, this kind of role play doesn’t work. I agree.”

To counter that negative impression, Ward ensures that his actors enter his client’s training rooms with fully developed characters and back stories, and extensive knowledge of the client’s corporate culture, challenges and most importantly, how employees “walk-n-talk.” Then, he has the actors perform short scenarios based on carefully fictionalized accounts of real events and people and debriefs each one, often asking the audience to offer suggestions on how the situations could have been better handled by the characters. The actors then return to the stage, replay the scenes and do a better job the second time around.

“Having professional actors perform realistic scenarios before doing the role-play sessions really ‘wows’ the audience,” Ward says. “Trainees realize this isn’t an ordinary training program and are much more comfortable practicing their newly learned skills on professional actors who walk and talk just like their colleagues, who know how to stay ‘in character’ and improvise. It’s extraordinarily powerful, and most trainees report that they found that it was not only highly effective and memorable but fun too.” 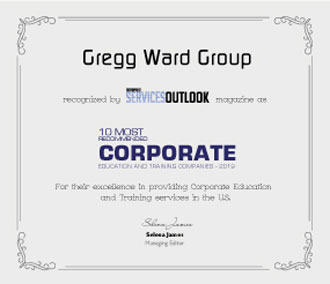 Description
The Gregg Ward Group – experts in using live, professional theater and experiential learning in training on complex workplace issues. The company is on a mission to transform lives via experiential learning and development programs that create respectful organizational cultures. The first to start using these innovative techniques back in the mid-1980s (Live Theater Training specifically), Gregg has developed and delivered more than 2,500 programs to help organizations move out of the command-and-control mentality and into respectful and inclusive cultures that maintain the highest standards, employee engagement, and performance

However, if you would like to share the information in this article, you may use the link below: